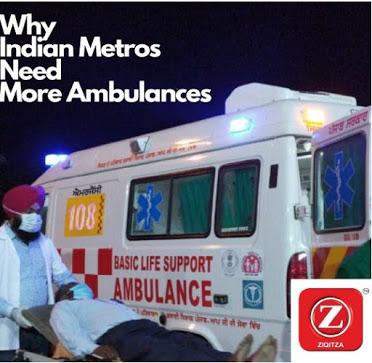 If we disregard the title, all cities in India need more ambulances as there is an unbelievable shortage of everything related to the medical sector in India. But metropolitan cities in particular like Delhi, Mumbai, Kolkata, and Chennai have the utmost need of increasing their ambulance numbers as well as their quality.

However, one would expect ambulance services to be decent in major commercialized cities, right? Well, that’s debatable. Sure there is a much better chance that an emergency will be acknowledged and tackled quickly in comparison to rural areas of the country, but overall the emergency services or even metro cities of India are incomparable to those of the USA, Japan, or the UK.

Many factors come into play when we talk about why Indian metro cities need more ambulances, but they are mainly high population density and high demand. These two factors are responsible for the major emergency inadequacy of metro cities that like to masquerade as ‘developed regions’ in the I.T hub of the world.

In addition to basic maths that dictate a larger number of accidents that can occur in densely populated areas, there is also the added factor of occupational risks. Metros tend to be industrial hubs that employ onsite and office workers alike. This leads to various injuries and accidents happening across the board. Factory equipment can malfunction causing death and destruction or an office building may be burnt to the ground. The possibilities of accidents occurring in a densely populated area are higher, but these things in metros can make the probability of an accident occurring go significantly up.

Most major corporations have their base of operations set up in these metropolitan cities. And as research indicates, large corporate workers are under a higher danger of accidents occurring, be it mental or physical. That’s the biggest reason why a metropolitan workforce is in greater danger than others.

Some good news to hear is that all 4 metro cities have reported a slight surplus of ambulances required. According to the WHO, a city like Delhi should have had 196 ambulances in 2019 whereas the city reported 234 active ambulances, with similar patterns in Mumbai and other metros as well. But numbers can cast strong illusions on the grazing mind. A deeper study by AIIMS in 2012 revealed that a mere 13% of the state’s ‘working ambulances’ in Delhi had advanced life-supporting equipment to be used in critical conditions, while 7% had basic life-supporting equipment with no drugs or ventilators. All others had no life support system at all.

There is a great need for modernized ambulances in metros as being the industrial hubs of the country; it is appalling how poor the situation for emergency services is right now in these cities. That’s why Ziqitza Limited ambulances are equipped with the best life-saving equipment to improve the quality of Indian ambulances. Ziqitza provides multiple options for an individual customer or Corporate to choose from including ambulances on call, ambulance on-site (Hospitals/Events/ Factory/office/Clubs/ Residential Societies) MMUs, subscription-based services, and much more. The company has already signed up over 50 corporates from various sectors including E-commerce, Manufacturing companies, Insurance, IT, Real estate, FMCG amongst others. Aiming to become a “one-stop solution” for corporate wellness & holistic healthcare for corporates, ZHL offers turnkey solutions that include Ambulance at Site, Wellness at Workplace, Telehealth Services for Employees, Medical Rooms, Doctors on Site, and Occupational Health Therapies, among others.

Ziqitza Limited ambulances are constructed with sharp precision to ensure the safety of its patients and paramedics who risk their lives to take care of others. They are the best in the market and are fitted with oxymeters so that the patient can be kept at bay till he/she reaches the hospital. The paramedics are professionally trained and wear Hazmat suits for a COVID case emergency. Separate ambulances are used for COVID cases and non-COVID cases.

Ziqitza Healthcare operated MMUs (mobile medical units) are the future of emergency ambulance services. They are essentially a commercial tempo traveler turned into a medical transportation unit capable of housing much more advanced life-saving tools than an ordinary ambulance. They are especially useful in a country like India which has innumerable medically unequipped inaccessible areas. Ziqitza plans to launch them all over the country but for now, our MMUs provide preventative and curative healthcare in remote and inaccessible regions of Madhya Pradesh

In addition to offering private services, Ziqitza Healthcare ltd is also involved in a private-state service with state governments across the country. ZHL is Partnering up with the state government to provide state of the art ambulances and diligent emergency call services to the local people so that preventable tragedies do not occur. In the states of Madhya Pradesh and Odisha, Punjab, Jharkhand, and Sikkim. Ziqitza Healthcare ltd operates the 104 health helpline to assist citizens with minor ailments and mental distresses.

ZHL has currently more than 10,000 people working tirelessly, day and night, to serve people in India. ZHL is currently operating more than 3300 ambulances across 16 states and has served more than 24 million people to date. If you found this blog informative, check out more of Ziqitza’s blogs here.