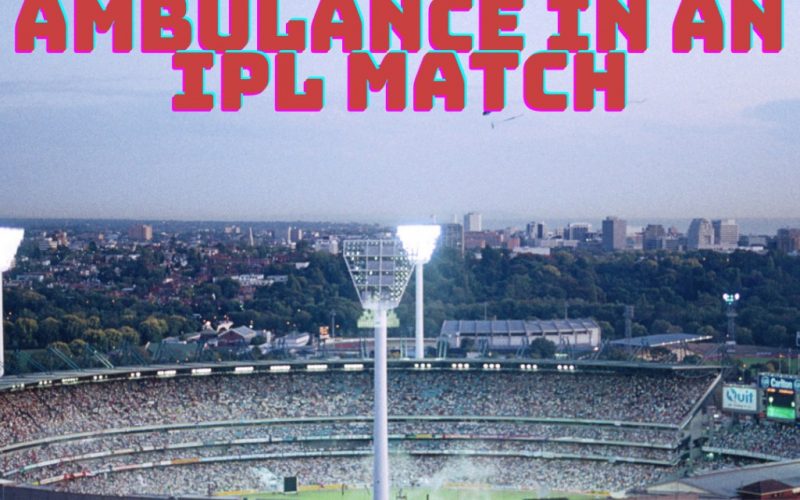 An IPL match is not just a regular run of the mill cricket match. It is an individual festival about different cultures that are spread out across 8 states of the country. During IPL season, every screen lights up to gawk at indigenous as well as foreign sportsmen at the top of their game. The IPL games have seen some crazy portrayals of not only cricket but also pure athleticism. Despite being a local, private cricket league, the stakes are enormously high.

And when the stakes are high, the sportsmen tend to take the game to the next level. But the problem arises when taking the game to the next level. An IPL match is more prone to injuries and accidents due to the insane pressures the cricketers face. Unforeseen and dangerous injuries are common ground in an IPL pitch they are considered a part of the game. But regardless of the nature of the game, precautions should be taken to either prevent or at the most quickly treat tragedies occurring on the pitch.

That’s why Ziqitza Healthcare, a leading global emergency service provider and frequent IPL ambulance supplier is going to take you through the role of an ambulance in an IPL match, what situations it is faced with, and how did Ziqitza Limited come about to be the emergency services provider for the most successful IPL franchise of all time, the Mumbai Indians.

What Is The Role Of An Ambulance in an IPL match?

As mentioned above, an IPL match is not just a cricket game. It is a display of unbelievable athletic prowess, precise cricketing techniques, and yet also a showground for the world’s best unorthodox cricketing styles. An IPL match is a world-class platform for a youngster and a training ground for a top-level professional cricketer. Every sportsman tries to maximize his potential on the ground, and that, unfortunately, comes with a lot of problems.

For starters players regularly injure themselves on the ground which the team physiotherapist usually takes care of. But more often than not, a player succumbing to the huge impending pressure of the game injures himself severely. So in that case, an ambulance has to be on-site to safely and securely transport the sportsman to a hospital to be tended to by a physician.

But the players are not the only ones that are to be taken care of during a game, albeit they are the most important ones and are given the maximum attention. The staff and the visitors also need to be tended to if they suffer an emergency and the ambulance operators must provide their services to them.

Even in this season of the IPL where there is no in-person attendance, an ambulance is a must as there is always the possibility of a horrible yet preventable tragedy just waiting to occur. An ambulance is an essential part of an IPL game as emergencies due to the nature of the game are a part of what happens on the pitch.

What Are The Situations Faced By An Ambulance Operator In An IPL Match?

Emergencies inevitably are a part of any event involving a huge number of people, especially a sporting event. There are regular injuries and grave situations faced by players, staff, and attendees alike and an ambulance has to be on the ready to transport them securely.

The present ambulance paramedic and driver must perform any emergency life-saving procedures and transfer them securely to the nearest hospital. Most of the time it is the players who require grave medical attention either during or after the match but emergencies involving team staff are also quite common.

In the latest season of the Indian Premier League, extreme care of everyone involved in the game has to be taken as the pandemic is still going strong. With matches being held in both Indian cricket grounds like Sharjah in Dubai and foreign grounds like Abu Dhabi in Dubai, the ambulance operators have to be on their toes to be on the lookout for emergencies. Ambulance operators have to be quick and respond accordingly to the situation. There is no margin of error.

With a huge and overly excited population, ambulances employed for an IPL match have to always be alert and prevent any tragedies from occurring. It is a highly tense and pressured job.

What Role Has Ziqitza Played In An IPL Match?

Ziqitza Healthcare Ltd is the largest social enterprise in  Asia and the best emergency service provider in India. Ziqitza has revolutionized how private ambulances operate in India and has brought Indian emergency services at par with international standards.

Ziqitza Limited offers a variety of ambulance services across the country in all major cities with an ambulance network of over 3,000 ambulances. Ziqitza has served in over 16 states and also operates many helplines for the private and government sector alike.

Given its extremely polished portfolio and expansive network, Ziqitza Healthcare was chosen as the official ambulance provider for the most successful IPL franchise of all time, the Mumbai Indians. Ziqitza Limited was responsible for providing all emergency services for the team and had ambulances on-site for every match.

Ziqitza Healthcare Ltd has continuously proven to be the top ambulance provider and has plenty of experience in the field of emergency services. Ziqitza Rajasthan also offers Corporate Wellness Solutions in the state for its clients. Check out more blogs by ZHL here and contact us at contactus@zhl.in to know more about ZHL’s services.