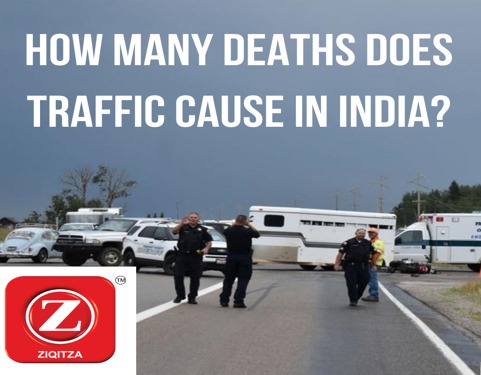 One thing that people like to bring up the most since lockdown commenced and subsequently ended is the statistic of deaths caused by traffic in India. It is indeed a humongous number but incomparable to deaths caused by the Coronavirus as Corona casualties are only going to exponent further. However, it is interesting to note that just like the Coronavirus, we have no cure for traffic deaths except of course common sense, proper precautions, and a little bit of luck. So it is exactly like fighting against the Coronavirus! (a joke, of course)

But coming back to the point, the number of deaths caused by traffic is staggering and the reasons behind it may be of varied nature. So in today’s Ziqitza Healthcare ltd blog, we’re going to dive deeper into the statistics of traffic deaths and what may be the reasons behind them.

So yeah, traffic does cause a lot of deaths and does more damage every year than the Coronavirus has done in its lifetime. But again, it’s like comparing apples to oranges. Although two comparable things are counts of deaths in the number one and number two countries due to traffic-related accidents.

The US reported 45 thousand deaths due to traffic in the year of 2018, and India had more than triple the deaths of those in the US. What’s more concerning is that the number of deaths due to traffic-related accidents is going down in other countries like the USA and China, but is steadily rising in India. Not only is the number of deaths rising, but the rate of death per accident is rising exponentially. So why is India mysteriously growing in accident-related deaths more than its counterparts? Well apart from lawlessness on the roads, Ziqitza Healthcare believes that few reasons might be inadequate emergency services availability and poor infrastructure or traffic which at placesmakes it difficult for ambulances to reach on time to transfer the accident patient.

It is of no surprise that Indian emergency services are not on par with its international counterparts, but what’s more alarming is that even with a significant rise in traffic accidents and deaths and worsening of the traffic system, there is very little improvement in the Indian emergency service system. 1 ambulance per 100,000 is what the Delhi Chief Minister promised but we are miles away from such a thing.

Not only is it the number of ambulances, but also the state of the ambulances. Most ambulances in India are reported to be extremely stripped down of any features at all, and the ones that do remain don’t even work. The paramedics and drivers are irresponsible, resulting in the deaths of many patients that could have been saved easily.

The ambulances provided by Ziqitza Healthcare have professionally trained paramedics and careful drivers who have been properly educated for operating ambulances. Ziqitza planning to add 77 more ambulances in the 108 in Punjab by December 2020 in public private partnership with state government so that we can increase our reach to provide the best emergency services offered in India.

Ziqitza Healthcare ltd has also operates over 150 MMU (Mobile Medical Unit) inb Madhya Pradesh which provides primary healthcare access to remote medically unequipped areas and provide them with on-the-spot treatment if the hospital is too far to reach. See it for yourself, book a Ziqitza ambulance here.

Despite reporting the highest number of accidents and accident-related deaths continuously for the past 3 years, there has been little improvement in increasing the reach of the department of emergency services.

Many states like Rajasthan have a significant number of rural areas that are overtly medically unequipped and don’t even have the most basic level of emergency transportation. Traffic-related deaths in these regions and in the overall country are extremely high as there is no streamlined way to call upon a government ambulance for a tragedy.

Ziqitza Limited has been contracted with providing state of the art ambulances for 16 states in India. In many states they also work under the National Health Mission(NHM) that are equipped with the best electrocardiography (ECG) machine and the largest oximeter available on the market. Any tax paying citizen of India living in the states of Madhya Pradesh, Odisha, Jharkhand, Sikkim and Punjab, can dial the 108 helplines and avail free ambulance services operated by Ziqitza.

As said earlier, there are no streamlined services like those in the USA that ensures every citizen gets the same level of emergency services across different states, it is all distributed into fragments. And that is one problem we need to tackle before it comes crashing down on us.

Deaths Due To Traffic In Lockdown

It is not all bad news though, deaths due to traffic have gone down significantly. All of it can be attributed to the lockdown as fewer and fewer people are on the road traveling. One more reason could be that the police are now on the road much more frequently which leads to a lot of lawfulness that wasn’t observed before.

There has been an average of 62% decrease in traffic deaths across India involving both public and private vehicles. Maharashtra saw a decline of 1.5 thousand deaths going from 2,665 deaths one month before the lockdown to 1,032 after one month of lockdown, while Chandigarh and Daman & Diu reported no deaths.

So it’s safe to say that deaths are coming down due to the lockdown at least in some areas, but proper emergency services need to be implemented in India otherwise it will be a disaster that will slowly creep up on us. Improving ambulances will not only help out in traffic-related deaths but can also be helpful in areas like Corona testing, something that Ziqitza’s ambulances will be capable of if given the chance on a national level.