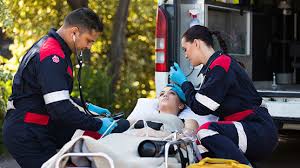 What is an EMT

An Emergency Medical Technician, popularly known as an EMT, is a provider of emergency medical services (EMS). Commonly deployed in ambulances, they are clinically trained to promptly and efficiently respond to emergency situations, accidents and other related medical issues. In India, Ziqitza Healthcare Limited a.k.a. ZHL, as a part of its endeavor to improve the healthcare sector, is increasingly giving impetus to EMT jobs due to the crucial role they play during emergencies and crises.

It is essential to understand the basic difference between an EMT’s job as opposed to a paramedic’s, as on many occasions, people tend to blur the lines between the two. While a paramedic’s job involves the provision of advanced emergency medical care like giving support during traumas and heart attacks, an EMT’s job is associated with performing CPR, assessing the medical needs of the patient, and providing aid during medical emergencies, traumatic injuries, and accidents.

The emergence of EMS in India

The system of Emergency Medical Services, commonly referred to as EMS, has witnessed constant evolution, ever since its inception. In India, particularly, EMS earlier was more often than not, described as ‘fragmented’.  However, a lot has changed since then, and today, the country takes pride in its EMS that has grown from strength to strength and continues to undergo exponential expansion. As part of its EMS, the country has also recognized the value of an EMT’s job, especially with regard to its ambulance services.

From starting off with its presence in urban India, EMS has, in no time, expanded its footprint to remote areas of the country, with a primary focus on road-accidents and traumas, thereby receiving massive recognition as a crucial part of the Indian healthcare sector.

Under EMS, 108 and 102 are popular helplines associated with its prompt and robust ambulance services across India. The provision of EMS forms an integral part of the Indian Constitution, with consistent efforts to improve the budget allocation towards the health industry, annually.

Furthermore, Indian EMS has successfully gone beyond borders, as several international organizations and academic institutions have been associating with its providers. With the EMS system witnessing exponential growth, and the demand increasing Pan-India, especially for its ambulance services, there are several opportunities increasingly opening for EMT jobs.

Education, Training, and Recruitment for EMTs

Currently, there are tens of thousands of vacancies for trained EMTs who can be employed for ambulance services under Indian EMS. With the increasing significance of EMS, several universities and institutes of India have incorporated recognized degree, diploma and certificate programs to educate aspiring EMTs.

Moreover, following the launch of the Ayushman Bharat scheme in September last year, a number of these healthcare academies have been focusing on inculcating a state-of-the-art curriculum with regard to their EMT programs to make students more employable.

A surge has been witnessed in the number of training programs for EMT job prospects, especially for the personnel to be deployed to ambulance services. Youngsters across the country are being increasingly encouraged to undertake vocational and related training for EMT jobs, with several institutes offering placements too. Employment camps in certain states have also been set up in recent years to recruit EMTs. With the introduction of a number of ambulance services in India, the demand for EMT jobs has evidently risen.

As a pioneer in Emergency Medical Response Services and Patient Transport Services in India since 2005, Ziqitza Healthcare Limited (ZHL) has had its biggest USP in the holistic medical training it provides its EMTs. It has a plethora of well-grounded training programs comprising its principles taught by an experienced faculty, to make aspiring EMTs well-equipped for prompt decision making in highly stressful scenarios. Trainees are put in real life situations to add the element of reality and are consistently monitored throughout their course so that confidence is instilled, and further support is provided for them to secure EMT jobs on course completion.

Moreover, ZHL recruits thousands of people for EMT jobs annually for its ambulance and related services, who have been trained under its sister concern, Life Supporters Institute of Health Sciences (LIHS), a registered not-for-profit, recognized by The Government Of India for EMT and Paramedic Training.

In India, there have been several accidents and mishaps for many years now, especially with respect to the road. In such cases, the ‘Golden Hour’, and the ‘Platinum Ten Minutes’ are of prime essence because prompt medical attention is imperative to increase the chances of survival. In rural areas of the country, this has known to be a bigger challenge due to the lack of sincerity and efficient services as well as personnel during emergencies.

While such situations have occurred less frequently in the recent past, unfortunately, there are still people in India who do not rush to the aid of the injured during accidents and mishaps. Therefore, there is an eternal need for trained EMTs, especially for ambulances who basically tend to be lifesavers in case of such fatalities.

Ambulance attendants alone, in many cases, find it challenging to handle the situation. At such times, trained EMTs are a boon as they are well-equipped to provide care to the injured until their treatment. Having them aids in not only making accidents and traumatic mishaps care efficient but also creating awareness amongst people regarding the quality of life perseverance in the country.

Fortunately, ZHL has been providing efficient EMS for several years now, as a part of which, it has a number of trained and well-equipped EMTs to handle emergency situations across urban and rural areas of the country. They are not only skilled to promptly deal with potential crises and complications during critical minutes, en route to medical centers, but also to provide care and relief to victims.

With trained EMTs, especially those working in ambulances, there are higher chances of survival in the case of accidents, trauma and mishaps are. This explains the growing demand for EMT jobs and sound education and training that is on par with developed countries for the same, and to further improve the EMS system in India.