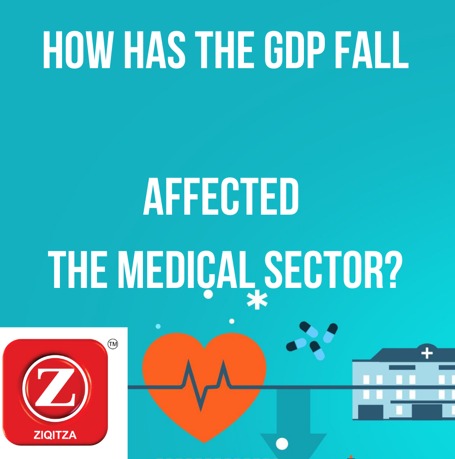 The 23.9% GDP fall has left everyone in shambles. An economic downfall due to the spread of the Coronavirus and the lockdown was expected, but such a significant fall all the while with the constant exponential rise in cases has surely endangered the country’s future.

A cut down in a quarter of a country’s GDP ensures that every section of it experiences major difficulties, be it the cultural section or the professional section. It is interesting to note that in the coming recession, as is the case with any recession; many sectors will get hit more hardly than others.

But as the pandemic goes on and people sit tight waiting for the vaccine, the medical sector has to power through all of the difficulties it experiences because of the GDP downfall. But how exactly will such a major fall affect the medical sector?

Well, the substantial areas that have been identified are as expected, the most obvious ones:

As the pandemic stretches forward with the economic crisis, the biggest immediate problems for the hospitals would be hiring new medical staff to reduce the stress and pressure of the already existing staff. It comes as no shock that hospitals in India were short-staffed, to begin with, but due to the pandemic have reached the highest peak in the staff-patient ratio.

The economic crisis will lead to severe inadequacy in medical workers and nurses in Indian hospitals as hospitals will tend to hire the minimum workers possible, overworking the existing staff which may lead to a total medical disaster. The hospitals will be forced to hire fewer workers and pay them even less than before as a means to survive the recession.

If there is no substantial influx of money, hospitals would have to cut down on their expenditure in the field of expansion and maintenance as a hospital is also a private, money-making business. Private hospitals would stretch out on older, less advanced equipment as much as they can instead of updating their machines with the technological advancements that come out on the market to cut costs.

This would also mean that in addition to having a medical sector that is already subpar at best when compared to its international counterparts, whatever growth and momentum that the Indian hospitals were able to build before the recession would be lost. Indian hospitals would then sink even further, providing worse than before care for its patients.

Private hospitals would want to cut down costs in a lean and mean way, however, government hospitals in India already have been cut down without the pressure of an economic crisis. So the ill-equipped, extremely burdened government hospital will become even more ill-equipped and overburdened due to the recession, leading to many people in India who depend on the government for basic healthcare to be disappointed even more than they already have.

If we look at the big picture, an economic crisis/ recession will attract people towards skill-based jobs or jobs that don’t require the investment of a large amount of capital. It is impossibly expensive to achieve the title of a practicing doctor for a person with a weak financial background, that too in a recession. With less and fewer jobs for doctors in both the public and private sector and a never-reducing medical fee structure, it is not crazy to think that a person who doesn’t come from a family of doctors would opt for an MBBS degree due to the insane hurdles they’d have to jump through.

But what’s dangerous is that due to fewer jobs being available for doctors due to an economic crisis and people opting out of the field due to huge amounts of fees, it will result in a lesser number of medical graduates per year. This in turn would circle us back to the shortage of staff that hospitals in India have been facing since the dawn of time.

It is a pretty big problem, a problem for which one particular solution will never be fully correct. But the best direction to go from now would be for the government to take hold of its most important internal affairs: Education and Employment.

Meticulous planning is required to reel us out of this economic crisis, one that can only be achieved by reinventing our education and subsequent employment of the workforce. But it’s good news to see that dynamic and more modern policy changes are being observed in the department of education. Let’s hope it is followed by polishing up our employment sector so that we can power through both the pandemic and the recession.

Ziqitza Healthcare ltd is an emergency services provider that was founded in Rajasthan with a vision to provide the country with the best ambulance services that can match up with international standards. Ziqitza is a modern company that does business the traditional way.

We currently operate over 3,000 ambulances and has tie up with 5000 ambulances in over 50 major cities in India and provide several services for customers to avail of. Ziqitza Healthcare also offers corporate wellness programs and subscription-based ambulance services. Top of the line Ziqitza Limited ambulances will be available for a corporation on standby if any emergency occurs and telehealth services are also accounted for.

In addition to all of the above, people can also avail of the private services of Ziqitza Healthcare’s ambulances by dialing the number 9700001298 in states including Odisha, Rajasthan, Gujarat, Maharashtra, Punjab, Tamil Nadu, etc. Patients can also book an ambulance in major cities in India to get India’s best ambulances.