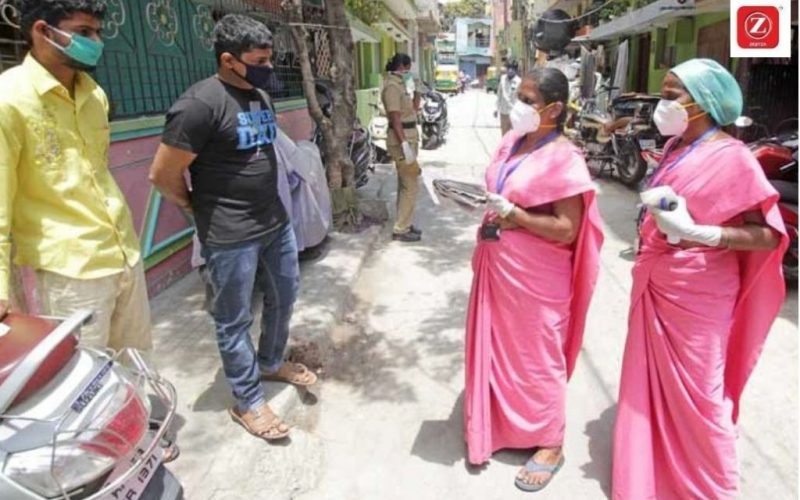 India’s female community health workers, most commonly referred as ASHA (Accredited Social Health Activists) workers, are one of the largest community-based health workforce in the world. India currently has over 9 Lakh ASHAs. The ASHA scheme is currently active in 33 states except for the states of Goa, Chandigarh & Puducherry. Ziqitza Healthcare, one of the nation’s leading healthcare institutions, states that each ASHA worker on an average supports 1000 people and is responsible for their access to public health services. Ziqitza, charts out that in most states in India, ASHA volunteers receive performance-based financial compensation for providing specific tasks such as immunisation, referring expecting mothers or pregnant women to health centres etc. Other responsibilities of the ASHA workers include activities such as, sensitising the community about new health initiatives, bridging the gap between the community and the health systems, spreading awareness about infectious diseases such as tuberculosis etc. They even support the auxiliary nurse midwives in delivering and child-care related services.

India fights many diseases which are major health problems and malaria is one of them. Malaria is a huge public health nuisance, especially in rural and tribal areas of the country. Ziqitza Healthcare ltd, points out scientific evidence that 80% of malaria cases in South East Asia Regional (SEAR) countries are reported from India. The National Vector Borne Disease Control Programme (NVBDCP), aims to eliminate malaria by the year 2030 and has launched a framework for the same. The National Health Mission, focuses especially on eight States in India that have low public health indicators and infrastructure to tackle Malaria – Bihar, Jharkhand, Madhya Pradesh, Chhattisgarh, Uttar Pradesh, Uttaranchal, Odisha and Rajasthan. Under the aegis of National Health Mission, one ASHA worker is assigned for every 1000 people, which roughly translates to the population of one village. Ziqitza Rajasthan, further clarifies that these ASHA workers are appointed from the village itself and are trained to work as the bridge and interface between the public health system and the community.

Ziqitza Limited, adds to Ziqitza Limited Rajasthan’s statement and explains that ASHA workers also act as health promoters in their communities and themselves undergo extensive training to their job role which requires them to perform tasks related to immunisation, family planning, Maternal and Child Health, and disease preventions – malaria and tuberculosis. Considering ASHA workers’ advantageous position and their close proximity to the local community, they are involved in diagnosis and treatment of Malaria on a daily basis.  An ASHA worker screens suspected malaria cases using Rapid Diagnostic Test (RDT) kits and blood slides and administers complete treatment as per the national drug policy.

The Indian Council of Medical Research (ICMR), Government of Madhya Pradesh, in partnership with many medical and pharmaceutical companies hasformed the Malaria Elimination Demonstration Project (MEDP), a unique and first of its kind public-private-partnership. The MEDP’s goal is to apply the learning from successful elimination of malaria from 1233 villages of Mandla district, to the rest of Madhya Pradesh and other states of the country.

ZHL Rajasthan, points out that MEDP was successful in eliminating malaria from 1233 villages of the Mandela district in Madhya Pradesh because the programme engaged ASHAs in their response strategies and effectively used them in malaria control measures, which included activities like awareness camps, diagnosis and treatment as well.

A similar success story can be traced in Odisha. From 4,36,850 malaria cases in Odisha in 2015, to 66,301 cases in 2018, Odisha reported 85 percent reduction in malaria cases. The National Vector-Borne Disease Control Programme, credited the success of this to ASHA workers. Ziqitza Health care limited, explains how Odisha achieved it. The State adopted a three-step project to control the spread of malaria. These steps were executed by 47,147 ASHAs. As the first step, ASHAs test any case of fever for malaria – so that treatment is met early and the parasite is killed before mosquitoes spread it. Second, as part of a programme – DAMAN — DuragamaAnchala Re Malaria Nirakaran, run by the Odisha state, the entire population had to undergo malaria tests, irrespective whether they had symptoms or not. The Odisha government also used indoor residual spray method, in which residual insecticide was applied to inner walls and ceilings of the houses. Third, the state government also distributed around 1.1 crore long-lasting insecticide nets (LLINs) to combat malaria exposure during sleep. ASHA workers went to each house explaining the benefits of the net’s use. The role of ASHA workers in combating malaria is unparalleled, they’re the communities first wall of defense and the bridge that connects the communities to the public health system.